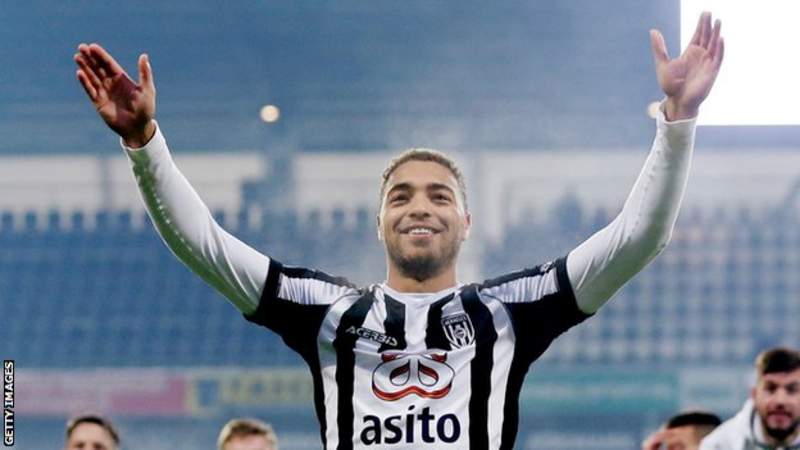 Heracles’ striker Cyriel Dessers – who finished the Dutch Eredivisie season as joint top scorer – has said missing out on his Nigeria debut because of the coronavirus pandemic was “painful”. Dessers, 25 – who was tied on 15 goals with Ajax’s Steven Berghuis at the top of the goal-scoring charts when the Dutch campaign ended early – received his first Super Eagles call-up in March. He was included in Gernot Rohr’s squad for an Africa Cup of Nations qualifier against Sierra Leone, but the match was put on hold because of the Covid-19 crisis, denying Dessers a chance to represent the country of his mother’s birth.

“It hurt me because I thought it was going to be one of the best moments of my life – or at least my career – and that it didn’t go through was really painful,” Dessers said. When he finally joins up with the Super Eagles, it will be his first time visiting Nigeria. But the Belgium-born striker says he has been hooked on the African nation’s rich football history since he was a boy. “When I was 12 years old, during technical trainings at my academy, every player had to choose one skill or move. Some kids did the scissors kick or Ronaldinho but mine was always the Okocha moves,” he recalled. “I loved him when I was a kid.” Dessers, who studied law at the University in Belgium, also vividly remembers watching Nigeria win their third Nations Cup in 2013. “It was really special because at that moment I was in college studying. I wasn’t even a professional football player, I remember being so happy – with Mikel the captain, Emenike with the goals. It was a special moment for sure.” Six years later, he was thrilled to see some of his future national teammates winning bronze at Egypt 2019 and is hopeful that he will be “accepted” into Nigeria’s “really nice group.” “I know it’s a young team, a lot of players playing in Europe, so I think that the adaptation would be fine and I hope when I come into the team they accept me. “I am looking forward to seeing Victor Osimhen, I like to watch a lot of football and watch the strikers and I think he is a great striker, and I hope I can help him and support him.” Cyriel Dessers became the second African behind Ivorian Wilfred Bony to finish as top goalscorer in the Eredivisie. He joins an illustrious list of names to have accomplished the feat including Marco van Basten, Dennis Bergkamp, Ronaldo, Ruud van Nistelrooy and Luis Suarez. The award for the top goalscorer in the Dutch Eredivisie, though a keenly contested prize, has often proved elusive for players of ‘De Grote Die’, (the Big Three) in the last decade. Breaking into this coveted list for Dessers with Heracles who were in eighth position was a “good feeling” and although he feels he could have increased his tally, he agrees with the authorities’ decision to put the safety of people first. “I think the health of the people, firstly the players and also the people in and out of football is more important than football in any case – the economic reasons in the Netherlands are lesser than other leagues, so I agree with the decision.” Despite only starting his professional football career in 2013, Dessers’ football journey has come with what he describes as some “ups and downs.” “There was a period where I went in and out of my previous teams and then it was really difficult to get a good rhythm and to get my confidence high. I also got injured and these things moulded me – they were turning points in my career, I learned. “Then I joined a team, Heracles, who could give me confidence, time to play, with a good coach and team around me and then beautiful things became possible.” Dessers says the lockdown has been like an extension to his lifestyle and is taking plenty of comfort in the fact there is some football action to look forward to since the Eredivisie resumed training in small groups. “I miss football, the feeling of the game, the match day, but I’m also happy that now, I can start to feel the ball again. It’s only training, but it’s better than nothing.”