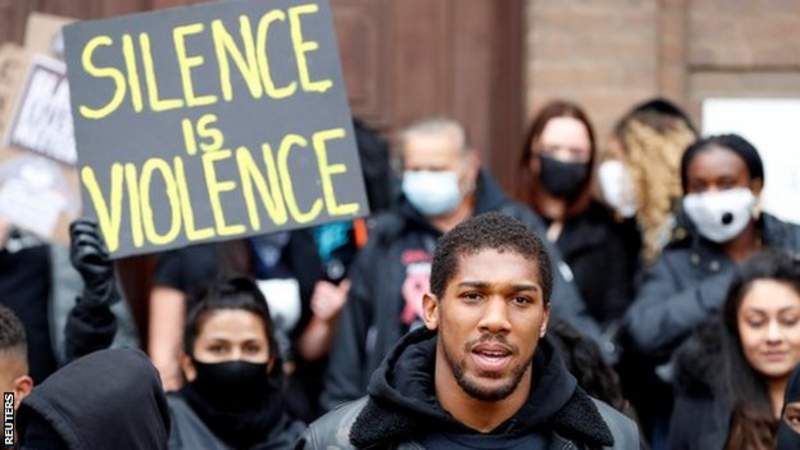 World heavyweight champion Anthony Joshua described racism as a “pandemic” when he addressed protesters at a Black Lives Matter march. The 30-year-old, wearing a knee brace as a “precautionary measure”, read a poem and spoke in front of hundreds of people in his home town of Watford.

“The virus has been declared a pandemic,” Joshua said. “This is out of control. And I’m not talking about Covid-19. The virus I’m talking about is called racism.” The IBF, WBA and WBO world champion added: “We stand united against a virus which has been instrumental in taking lives, taking lives of the young, old, rich, poor; a virus which is unapologetic and spreads across all sectors.” At the march Joshua walked with crutches and also used a scooter after he felt a “twinge” in his left knee during training this week. “It will be further checked by his doctors but there is no immediate concern,” his spokesman said. “The brace is a precautionary measure on the advice of physios.” The protest was one of several across the country on Saturday following the death of American George Floyd. Floyd, 46, died while being arrested on 25 May in Minneapolis. The four officers involved have since been charged over the death, which sparked days of protest in the US and Black Lives Matter demonstrations across the world.