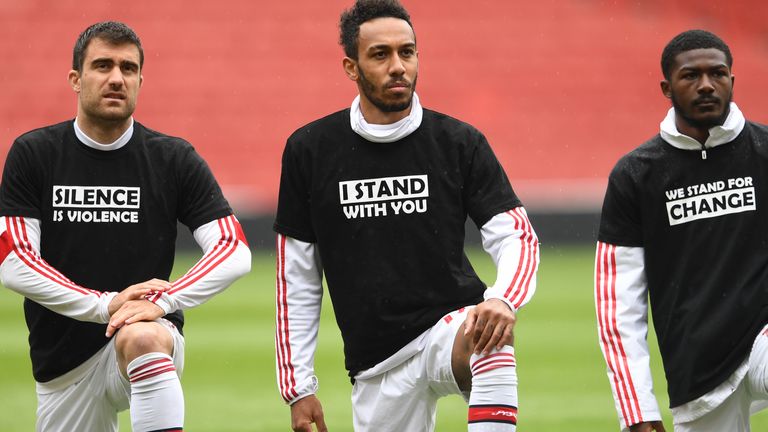 Arsenal players wore Black Lives Matter T-shirts and took a knee ahead of their friendly against Brentford on Wednesday night.

Athletes across the world, including Premier League footballers Raheem Sterling, and Tyrone Mings have joined in support of protests triggered by the death of unarmed black man George Floyd in US police custody last month. Photographs shared by Arsenal on social media show the squad warming up in the T-shirts, which carried a variety of messages in support of BAME communities. Bukayo Saka wore a shirt which read: ‘My skin is not a crime’, while Hector Bellerin who was pictured training beside wore a shirt that said: “I’m not black but I stand with you”. A T-shirt worn by Kieran Tierney read: “I can’t breathe”. Arsenal manager Mikel Arteta took a knee alongside his team, with Pierre-Emerick Aubameyang, Alexandre Lacazette and Matteo Guendouzi among the players pictured in the photographs.