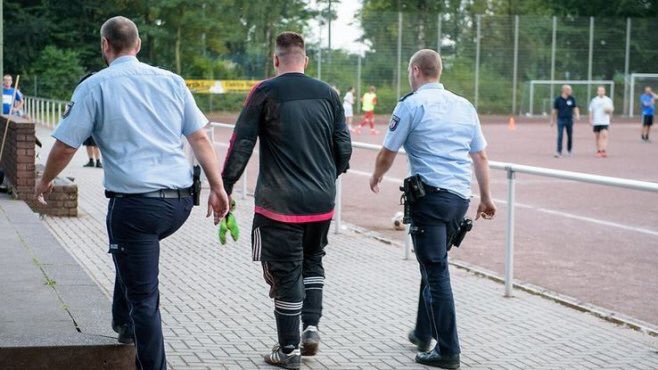 The goalkeeper of a German amateur club who were beaten 43-0 was arrested by police at his first training session after the result. Reporters from Germany’s Express newspaper paid Marco Kwiotek a visit after he fished the ball out of the net 43 times during SV Vonderort II’s defeat to PSV Oberhausen earlier this month. While he was training, two uniformed officers arrived and approached him. He returned to the dressing room and was led away, telling the Express: “I just need to go to the station to clear up a few things.” The reason for the arrest is not clear.

According to the Express, he was released after questioning, although Vonderort’s coach Yvonne Liesenfeld left him out of last Saturday’s 8-0 defeat to Batenbrocker Ruhrpott Kicker III for his own good after his story hit the papers. “It’s to protect him,” said the club’s general manager Christian Schroer, who recalled the embarrassing scenes of his side’s heavy defeat, which saw the opponents score more goals than there were fans in attendance – at a rate of one practically every two minutes. “Each time we kicked off again, they got the ball back and played straight back towards our goal and scored – it was pretty disappointing,” Schroer said. “In the end, everything really just fell apart.” Oberhausen, a city whose biggest football claim to fame until now has been World Cup pundit Paul the Octopus, sportingly agreed to sacrifice three players at half-time after some of the Vonderort team went home. “We had so few players that we had to stock our team up with members of our veterans’ side,” Schroer said. “We also had a couple of really young lads there and one of them just went home during the game.” Kwiotek has become a star in Germany since conceding so many goals, but said he just wanted to “forget this game as quickly as possible”.