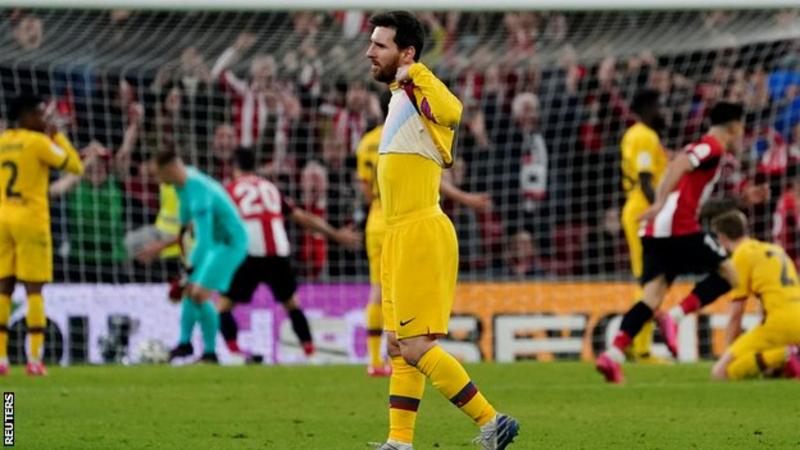 Barcelona’s hopes of reaching a seventh successive Copa del Rey final have ended at the quarter-final stage with defeat by Athletic Bilbao. The tight contest was decided in the third minute of stoppage time when Spanish forward Inaki Williams headed past Marc-Andre ter Stegen. Barcelona captain Lionel Messi wasted a good late chance when he fired at the legs of Athletic goalkeeper Unai Simon. There was another cup shock earlier when Real Madrid lost to Real Sociedad.

It means for the first time since 2010, the Copa del Rey final will feature neither Barcelona nor Real. The two surprise results come a day after second-tier side Mirandes defeated Villarreal 4-2. Granada, who overcame Valencia 2-1, make up the semi-final line-up. Real Sociedad’s Martin Odegaard scored against his parent club to help send Real Madrid out of the Copa del Rey in a thrilling quarter-final. The Norwegian midfielder, who is on a two-year loan, opened the scoring. Alexander Isak netted twice in two minutes, including a superb acrobatic effort, as Sociedad went 3-0 ahead. Marcelo and Rodrygo scored for Madrid, in between Mikel Merino adding Sociedad’s fourth, with Nacho heading in late on. The defender’s 93rd-minute goal set up a tense finish at the Bernabeu as the referee played eight additional minutes. Although Sociedad’s Andoni Gorosabel was sent off for a second yellow card, Real Madrid were unable to find the equaliser. Real Madrid’s Vinicius Junior had a header ruled out by the video assistant referee for offside in the second half. Odegaard, 21, who joined Real Madrid as a 15-year-old, was rewarded with a standing ovation from the home fans as he was substituted in the 64th minute. Zinedine Zidane’s side are top of La Liga and have the best defensive record in the top flight with just 13 goals conceded from 22 games. They were unbeaten in 21 games coming into the tie. The draw for the last four takes place on Friday, with Granada – who knocked out holders Valencia – and second division side Mirandes both in the pot. 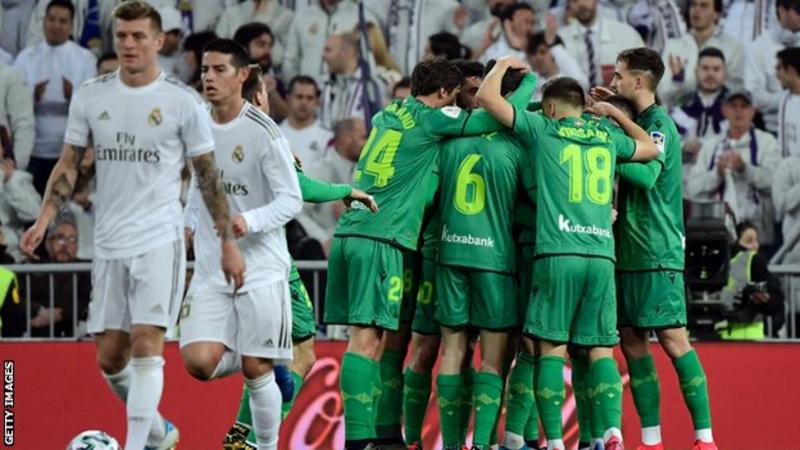