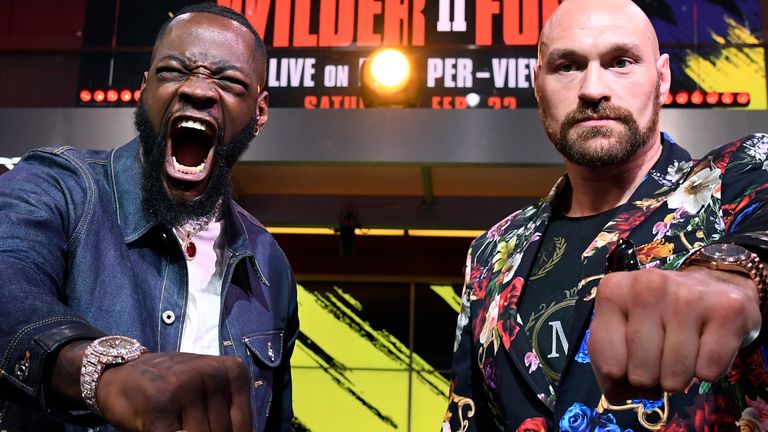 Deontay Wilder has threatened that Tyson Fury will have “blood in his face” and will need to be rescued in their world heavyweight championship rematch. WBC champion Wilder explained his plans to re-open the cut that Fury sustained in his previous fight against Otto Wallin when they meet on February 22 in Las Vegas.  Wilder said about Fury’s bloody win over Wallin: “I feel like the fight should have been stopped, with a cut so wide and deep. But I understand he had a major fight with me coming up. He was saved because of the fight that is happening right now. “I’ll be exploring the things that Wallin did. I look forward to recutting open his eye.

“Once it’s open and blood is in his face, I might get some on me as well. That’s alright. I’ll embrace it. We’ll see if they keep the fight on because I’m already dangerous. “With that eye cut open again, and blood in his face, it’s up to the doctors to take protocol. We already know my demeanour, my mannerisms, what I come to do. I don’t play around at all.” Fury has replaced trainer Ben Davison with Sugarhill Steward since his draw with Wilder. Wilder questioned: “I thought if it ain’t broke don’t fix it? If anybody should be changing things it should be me because he said that he beat me by a wide margin. “It is nervous energy. He says he beat me but he doesn’t honestly believe that. That’s why he’s changing things so much. “He isn’t confident dealing with me because of the state I left in him. The head is not meant to be hit by power like Deontay Wilder’s. “Deep down in his heart, I feel that he is very, very nervous. When you knock a person out and give them a concussion, you never forget that. You never forget who did it to you, and how they did it. When you go back in the ring with them a second time to relive it, it has to be stressful. You can’t sleep at night.” Fury’s new link-up with Steward, whose Hall of Fame uncle Emanuel trained Lennox Lewis and Wladimir Klitschko, has resulted in the challenger predicting a two-round knockout win. “I really don’t know their plans – what he’ll do or what he won’t do?” Wilder said about Fury’s prediction. “What is true or what isn’t true? If he wants to bring the fight to me, then come on! That benefits me more than anything. “I hope he sticks with his game-plan and follows through, not just talking for hype. If he does that, it makes the fight more interesting. “I’m the heavyweight champion of the world and I can’t be beat. What he says he will do? I think it’ll be two different things.” Wilder said about Fury’s punch power: “He has pillows as fists. That’s how soft they were. I took his punches and walked through them. “I don’t respect his power. There is none there, and he can’t develop it, I don’t care which trainer he brings in. What fighter has his trainer had where he’s developed power? It’s impossible.” The undefeated WBC champion called IBF, WBA and WBO titleholder Anthony Joshua “a coward”, and said about his former opponent Luis Ortiz: “He’s not the boogeyman to me but he’s the boogeyman to the rest of the division. To this day, nobody says his name.”