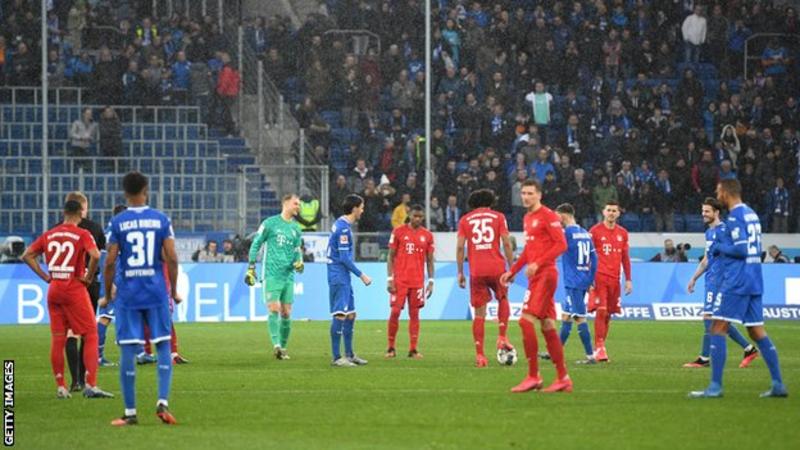 Hoffenheim and Bayern Munich played out one of the most bizarre conclusions in the history of football as they passed the ball between each other for 13 minutes after a long delay for an offensive banner in the crowd. Bayern were 6-0 up when their travelling fans unfurled an offensive banner about Hoffenheim president Dietmar Hopp. Coach Hansi Flick and most of the players pleaded – angrily in some cases – with the fans to put it away. Sporting director Hasan Salihamidzic and board member Oliver Kahn – both former players – also attempted to talk to the ultras.

Referee Christian Dingert eventually took the players down the tunnel and the game was suspended for about 20 minutes. The match eventually restarted from 77 minutes, with fans told it would be abandoned if the banner appeared again. Bayern’s and Hoffenheim’s players then just kicked the ball between themselves – with goalkeepers not in their goals – to get the game to its conclusion. At the final whistle, 79-year-old Hopp, Bayern chief executive Karl-Heinz Rummenigge and the players stood on the pitch and applauded Hoffenheim fans in a show of solidarity.

What about Hopp in Germany?

Billionaire Hopp is a divisive character in German football, having bankrolled Hoffenheim up from the fifth tier to the Bundesliga between 2000 and 2008. In 2015, Hopp was allowed to take a majority voting share – one of three exceptions to the 50+1 rule which means members must own more than half the shares in their club. The other two Bundesliga teams to not be owned by fans – Bayer Leverkusen and Wolfsburg – were both founded as works clubs. Bayern’s fans are not the first to protest against Hopp. In fact just last weekend a similar banner from Borussia Monchengladbach fans saw their Bundesliga game delayed. And earlier this month Borussia Dortmund fans were banned from away games against Hoffenheim for the next two seasons. Journalist Archie Rhind-Tutt, who was at the Rhein-Neckar-Arena said: “There is a lot of opposition by fans of traditional clubs. Last week I saw Borussia Monchengladbach fans unveil a banner with his face in the crosshair. Dortmund fans did that too. “That’s why Bayern ultras acted in solidarity with those two fans and held up the banner. Dortmund fans were chanting today in their game against Freiburg and it was briefly stopped. “Flick was furious. He ran to the away end twice and told them to stop it. You wonder in the context of what is happening in society is this where they draw the line? “This is a microcosm of the debate which has been brewing and bubbling away in German football for ages – tradition being rolled over by the new wave of money. “This feels like a watershed moment for German football in the way this whole debate will kick off. It shows the disparity – you have groups of fans like ultras who stand for a fan ownership model and a large majority just want to watch the game. “The feeling on the ground here is the right thing was done. I’m not sure that will be reflected across Germany. The debate will go on and on.”