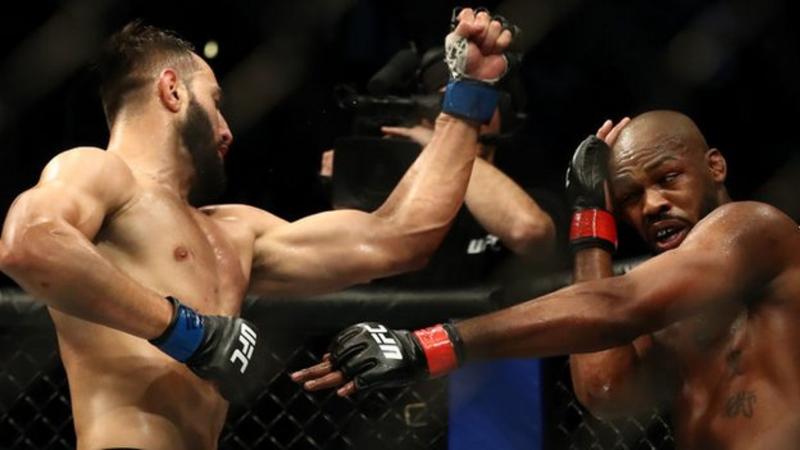 Jon ‘Bones’ Jones beat Dominick Reyes to retain his light heavyweight crown and set a new record for the most wins in UFC title fights. His 14th title fight win came via a unanimous decision over previously undefeated challenger Reyes in the main event of UFC 247 in Houston, Texas. When the scores were announced, the arena was filled with a mixture of boos and cheers. Jones, 32, was awarded the decision 48-47, 48-47 and 49-46. “To break a record, to be a part of UFC history in this way, I wouldn’t want it easy,” said Jones.

“If this stuff was easy, everybody out there in the audience would be doing it. It’s an incredibly hard thing that I did tonight. “Dominick is tall, he’s big, he’s strong, he was well coached. He’s a lot better than I thought he was. He knocked out everybody else he’s fought, pretty much. He was definitely a worthy opponent.” Reyes, 30, started the title fight at a furious pace as he put the champion under pressure in the opening rounds. The challenger pushed forward and found a home for his strikes as he forced Jones onto the back foot for long spells in the first half of the fight. But Jones’ five-round experience started to show in the second half as the champion poured on the pressure in the championship rounds. “Dominick did a tremendous job,” Jones added after the verdict. “Dominick, you have totally earned my respect, man. That was a great fight. “I think the difference in the fight was takedowns. I couldn’t keep him down for too long, but I was taking him down. It was close in the kickboxing exchanges, he landed some tough shots, but I believe my takedowns gave me the edge. “I knew it was a really close fight, and I turned it up in the fifth round. That fifth round won me the fight. Those takedowns won me the fight.” Reyes, meanwhile, was philosophical after losing out on the scorecards in a fight he firmly believed he had won. “I thought I won [rounds] one through three,” he said. “He was on me four and five, he’s a champion. He got those takedowns at the end, but I popped right back up. I didn’t think they’d be a factor at the end. “But I had him one through three. I was all over him. It is what it is. I’ll get better. This just proves that I’m the real deal.”