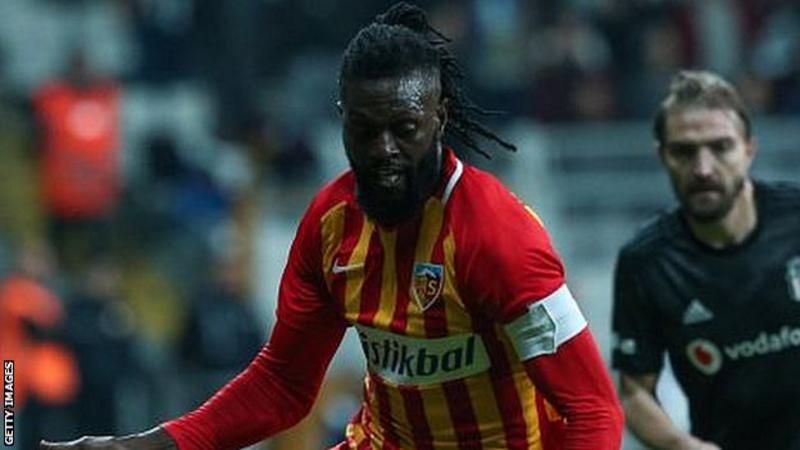 Paraguay giants Olimpia Asuncion have agreed a deal “in principle” to sign Togo legend Emmanuel Adebayor. The 35-year-old is a free agent after ending a brief spell with Turkish side Kayserispor in December for personal reasons. The deal is expected to go through when the 43-time Primera Division champions reach 35,000 season ticket holders, according to club president Marco Trovato.

“If by Monday, there is additional 20,000 season ticket holders [to reach 35,000], Emmanuel Adebayor will be an Olimpia player and be presented on Wednesday,” Trovato announced at a news conference. “This is our challenge, our objective, my commitment as well as that of the management, for the supporters of Olimpia. Everything is in principle.” The former Arsenal, Manchester City, Tottenham and Crystal Palace striker’s nomadic career path has taken him to France, Spain and Turkey, but is keen to move to South America. “Hello, I’m Emmanuel Adebayor. Become a member so we can see each other in Olimpia soon,” he said in a video posted on Twitter. Should the deal be completed, it will reunite Adebayor with former Manchester City teammate and current Olimpia captain Roque Santa Cruz. Both strikers joined City under Mark Hughes in the summer of 2009 and spent 18 months together before they both left Manchester on loan. Adebayor established himself in Turkey by scoring 30 goals in 76 appearances for Istanbul Basaksehir and eight for Kayserispor. Kayserispor was Adebayor’s ninth professional club since leaving his native Togo in 2001 and he previously played for French clubs Metz and Monaco as well as European football powerhouse Real Madrid. Named the 2007 BBC African Footballer of the Year and the Caf African Player of the Year the following year, Adebayor’s only silverware at club level was the 2011 Spanish Copa del Rey he won with Real Madrid. Despite his on-off relationship with the football authorities in Togo, he remains his country’s all-time top scorer with 32 goals and played for them at their only World Cup appearance in 2006. He has played for the Sparrow Hawks in four Africa Cup of Nations in 2002, 2006, 2013 and 2017. Adebayor’s last appearance for Togo was in a 2-1 away defeat to neighbours Benin in March 2019 in a 2021 Africa Cup of Nations qualifier.